This post discusses how maps are implemented in Go. It is based on a presentation I gave at the GoCon Spring 2018 conference in Tokyo, Japan.

What is a map function?

To understand how a map works, let’s first talk about the idea of the map function. A map function maps one value to another. Given one value, called a key, it will return a second, the value.

Now, a map isn’t going to be very useful unless we can put some data in the map. We’ll need a function that adds data to the map

and a function that removes data from the map

There are other interesting properties of map implementations like querying if a key is present in the map, but they’re outside the scope of what we’re going to discuss today. Instead we’re just going to focus on these properties of a map; insertion, deletion and mapping keys to values.

Go’s map is a hashmap

The specific map implementation I’m going to talk about is the hashmap, because this is the implementation that the Go runtime uses. A hashmap is a classic data structure offering O(1) lookups on average and O(n) in the worst case. That is, when things are working well, the time to execute the map function is a near constant.

The size of this constant is part of the hashmap design and the point at which the map moves from O(1) to O(n) access time is determined by its hash function.

What is a hash function? A hash function takes a key of an unknown length and returns a value with a fixed length.

this hash value is almost always an integer for reasons that we’ll see in a moment.

Hash and map functions are similar. They both take a key and return a value. However in the case of the former, it returns a value derived from the key, not the value associated with the key.

Important properties of a hash function

It’s important to talk about the properties of a good hash function as the quality of the hash function determines how likely the map function is to run near O(1).

The second property is good distribution. Given two near identical keys, the result should be wildly different. This is important for two reasons. Firstly, as we’ll see, values in a hashmap should be distributed evenly across buckets, otherwise the access time is not O(1). Secondly as the user can control some of the aspects of the input to the hash function, they may be able to control the output of the hash function, leading to poor distribution which has been a DDoS vector for some languages. This property is also known as collision resistance.

The second part of a hashmap is the way data is stored. 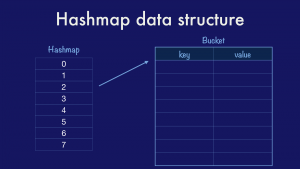 The classical hashmap is an array of buckets each of which contains a pointer to an array of key/value entries. In this case our hashmap has eight buckets (as this is the value that the Go implementation uses) and each bucket can hold up to eight entries each (again drawn from the Go implementation). Using powers of two allows the use of cheap bit masks and shifts rather than expensive division.

As entries are added to a map, assuming a good hash function distribution, then the buckets will fill at roughly the same rate. Once the number of entries across each bucket passes some percentage of their total size, known as the load factor, then the map will grow by doubling the number of buckets and redistributing the entries across them.

With this data structure in mind, if we had a map of project names to GitHub stars, how would we go about inserting a value into the map? 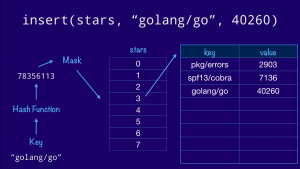 We start with the key, feed it through our hash function, then mask off the bottom few bits to get the correct offset into our bucket array. This is the bucket that will hold all the entries whose hash ends in three (011 in binary). Finally we walk down the list of entries in the bucket until we find a free slot and we insert our key and value there. If the key was already present, we’d just overwrite the value. 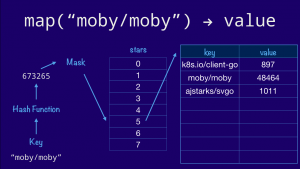 Now, lets use the same diagram to look up a value in our map. The process is similar. We hash the key as before, then masking off the lower 3 bits, as our bucket array contains 8 entries, to navigate to the fifth bucket (101 in binary). If our hash function is correct then the string "moby/moby" will always hash to the same value, so we know that the key will not be in any other bucket. Now it’s a case of a linear search through the bucket comparing the key provided with the one stored in the entry.

Four properties of a hash map

That was a very high level explanation of the classical hashmap. We’ve seen there are four properties you need to implement a hashmap;

Hashmaps in other languages

Before we talk about the way Go implements a hashmap, I wanted to give a brief overview of how two popular languages implement hashmaps. I’ve chosen these languages as both offer a single map type that works across a variety of key and values.

The first language we’ll discuss is C++. The C++ Standard Template Library (STL) provides std::unordered_map which is usually implemented as a hashmap.

This is the declaration for std::unordered_map. It’s a template, so the actual values of the parameters depend on how the template is instantiated.

There is a lot here, but the important things to take away are;

Now we know how the four properties of a hashmap are communicated to the compiler in C++’s std::unordered_map, let’s look at how they work in practice. 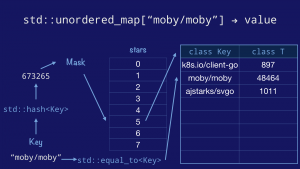 First we take the key, pass it to the std::hash function to obtain the hash value of the key. We mask and index into the bucket array, then walk the entries in that bucket comparing the keys using the std::equal_to function.

The second language we’ll discuss is Java. In java the hashmap type is called, unsurprisingly, java.util.Hashmap.

In java, the java.util.Hashmap type can only operate on objects, which is fine because in Java almost everything is a subclass of java.lang.Object. As every object in Java descends from java.lang.Object they inherit, or override, a hashCode and an equals method.

However, you cannot directly store the eight primitive types; boolean, int, short, long, byte, char, float, and double, because they are not subclasss of java.lang.Object. You cannot use them as a key, you cannot store them as a value. To work around this limitation, those types are silently converted into objects representing their primitive values. This is known as boxing.

Putting this limitation to one side for the moment, let’s look at how a lookup in Java’s hashmap would operate. 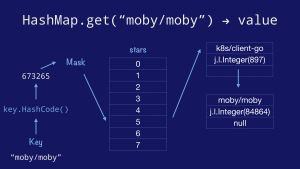 First we take the key and call its hashCode method to obtain the hash value of the key. We mask and index into the bucket array, which in Java is a pointer to an Entry, which holds a key and value, and a pointer to the next Entry in the bucket forming a linked list of entries.

Now that we’ve seen how C++ and Java implement a Hashmap, let’s compare their relative advantages and disadvantages.

In a word, maps in C++ can be as fast as hand writing a custom map for each key/value combination, because that is what is happening.

Just like C++ and just like Java, Go’s hashmap written in Go. But–Go does not provide generic types, so how can we write a hashmap that works for (almost) any type, in Go?

Does the Go runtime use interface{} ?

Does the compiler use code generation?

There are two parts to the answer, and they both involve co-operation between the compiler and the runtime.

The first part of the answer is to understand that map lookups, insertion, and removal, are implemented in the runtime package. During compilation map operations are rewritten to calls to the runtime. eg.

It’s also useful to note that the same thing happens with channels, but not with slices.

The reason for this is channels are complicated data types. Send, receive, and select have complex interactions with the scheduler so that’s delegated to the runtime. By comparison slices are much simpler data structures, so the compiler natively handles operations like slice access, len and cap while deferring complicated cases in copy and append to the runtime.

Only one copy of the map code

So, how can the compiler can rewrite this

without using something like interface{}? The easiest way to explain how map types work in Go is to show you the actual signature of runtime.mapaccess1.

Let’s walk through the parameters.

Why do we need a *maptype if we already have a *hmap? *maptype is the special sauce that makes the generic *hmap work for (almost) any combination of key and value types. There is a maptype value for each unique map declaration in your program. There will be one that describes maps from strings to ints, from strings to http.Headers, and so on.

Rather than having, as C++ has, a complete map implementation for each unique map declaration, the Go compiler creates a maptype during compilation and uses that value when calling into the runtime’s map functions.

In the _type type, we have things like it’s size, which is important because we just have a pointer to the key value, but we need to know how large it is, what kind of a type it is; it is an integer, is it a struct, and so on. We also need to know how to compare values of this type and how to hash values of that type, and that is what the _type.alg field is for.

There is one typeAlg value for each type in your Go program.

Putting it all together, here is the (slightly edited for clarity) runtime.mapaccess1 function.

One thing to note is the h.hash0 parameter passed into alg.hash. h.hash0 is a random seed generated when the map is created. It is how the Go runtime avoids hash collisions.

Anyone can read the Go source code, so they could come up with a set of values which, using the hash ago that go uses, all hash to the same bucket. The seed value adds an amount of randomness to the hash function, providing some protection against collision attack.

I was inspired to give this presentation at GoCon because Go’s map implementation is a delightful compromise between C++’s and Java’s, taking most of the good without having to accomodate most of the bad.

Unlike Java, you can use scalar values like characters and integers without the overhead of boxing. Unlike C++, instead of N runtime.hashmap implementations in the final binary, there are only N runtime.maptype values, a substantial saving in program space and compile time.

Now I want to be clear that I am not trying to tell you that Go should not have generics. My goal today was to describe the situation we have today in Go 1 and how the map type in Go works under the hood.  The Go map implementation we have today is very fast and provides most of the benefits of templated types, without the downsides of code generation and compile time bloat.

I see this as a case study in design that deserves recognition.