A few days ago a post entitled Autoworkers of Our Generation floated across my radar. In his post, Greg Baugues argues that as developers, we have a short term advantage, and would do well to view our lot as a temporary anomaly. In this article I’d like to engage with his post, and respond.

The key analogy of Baugues’ post is the parallel between the Detroit auto worker of the 1980’s and the Macbook hugging developer of the new millennium. Without disagreeing with the latter characterisation, I believe the analogy with the auto worker is flawed.

Detroit, or more generally, the American car industry of the ’80s was highly uncompetitive. The Go-Go decade of Wall Street had distorted the market for home made vehicles, With the oil crisis of the previous decade a distant memory, local car manufacturers pursued larger, more expensive vehicles, presenting them as aspirational symbols of bull market opulence. Luxury sticker prices supported the wage claims of Motor City’s highly unionised workforce and for a time there was a virtuous cycle; an affluent customer base drove demand for more expensive vehicles supporting an inefficient manufacturing sector.

The results spoke for themselves. By the 90’s, foreign manufacturers moved in to capture the under serviced budget car market and created a beachhead to attack the local luxury brands from a lower manufacturing cost base. Responses from the lobbing industry in the form of import tariffs, did nothing to solve the underlying structural problems and delayed the restructuring of the domestic producers. As a last ditch measure, the local manufacturers aggressively pursued off-shoring and automation, decimating the lives of many of middle class Rust Belt families.

The parable that Baugues’ tells is clear; if you or your parents were manufacturing cars in the 80’s, you could be forgiven for thinking that you had it made. However, to accept Baugeus’ analogy of the misfortune that vested on Michigan, is to accept that software development is a purely mechanical action, prescribed, just as the creation of a motor car on a production line. I cannot agree with this.

My career in the computer industry started in the mid 1990’s. I was there for the hysteria of the Y2k fiasco, and saw the effects of a generation of university graduates, late to the party, but none the less eager to share the spoils of unbounded consulting hours, meet the reality of the dot com collapse. In 2001 a degree in comp sci was worthless. Yet, within a few years, the industry had bounced back. With the exception of periods of industry wide delusion the demands for software developers, or more correctly the software itself, has always been strong.

In conclusion, I accept Baugues’ thesis that an economic winter is coming. It must, if for no other reason that every other boom in a western economy is followed by a bust. But I believe the further conclusion that software development will become automated to the point it can be produced en mass, is false.

I will leave you with the recommendations of the original author:

Don’t get too comfortable. Don’t get locked into a language. Don’t burn bridges for short term gain. Keep your tools sharp. Learn soft skills. Build an audience. Save some money. Network. Read.

It’s an obscenely good time to be a developer. Enjoy it while it lasts. 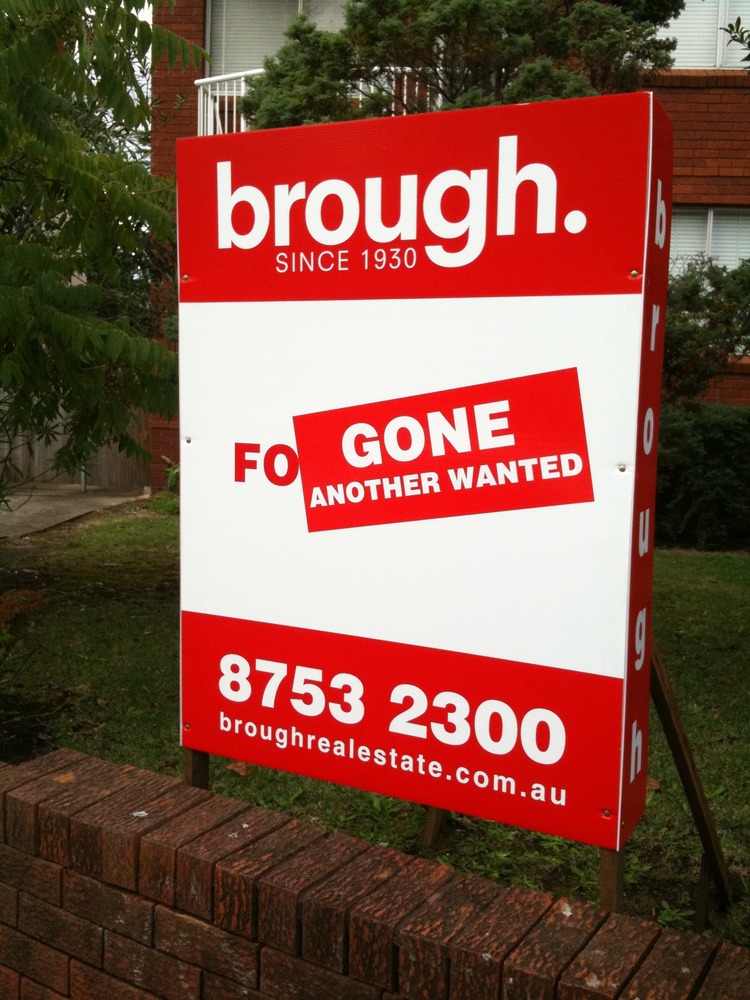 Sometime in the last week, not one but two of these billboards appeared in the front yards of blocks of units on a street in Ashfield. Surprisingly spartan on details, the board implies that the wizards at Brough Real Estate have made two sets of sellers, buyers and a themselves very happy, an increasingly difficult task in the current climate. Less believable is the fact these properties are directly opposite each other.

Clearly this is a ruse.

With a reported 350,000 properties on the market across the country, the question becomes, who is the audience for this call to action?

To steal a quote from Liaquat Ahamed’s Lords of Finance the best days of Australian housing bubble may be behind it. As an amateur economist and armchair property speculator I wanted to share my views on this subject.

During the 60s and 70s Ashfield, the formerly Polish, now Chinese migrant, inner west suburb of Sydney succumbed to vast swathes of development which saw the majority of Colonial and Fediterania bungalows replaced by two and three story apartment blocks. Due of their ubiquity and near identical layout, these properties provide an opportunity to study the effects of the Australian housing boom on a particular class of asset; the quintessential two bedroom flat.

Skipping forward a few decades to October 2009, it was a heady time for the Sydney housing market, and it was no different for Vendors in Ashfield. Landlords were dumping unrenovated 2 bedroom units onto the private market for $400,000 a pop. Saturday mornings saw Agents, weighed down with keys, leading platoons of eager DINKYs from inspecting to inspection. Estate agents, banks and solicitors were doing a roaring trade on the back of the dying months of the final extension of the First Home Buyers grant. Those who waited for the governments handouts to cease in the hope that the market would cool were out of luck, twelve months later I watched a 2br flat sell at auction for over $520,000.

However the present day in Ashfield reveals a different picture. The previous weekend I attended two auctions with similar outcomes. The first apartment, a ground floor flat sold for $370,000 to the first, and only bidder. The second, with rubberneckers spilling onto the stairs, was passed in at $451,000 after the vendor bid failed to push the lacklustre bidding above the reserve.

Much has been written about the Australian housing bubble, and I believe the diagnosis to be accurate. Clearly my shoulder surfing a brace of sales does not represent a trend, and more data is needed before I can say the age of the half million dollar Ashfield flat is over.

What is, however, less clear to me, is the prognosis for the price of 70 square meters of real estate in Ashfield.