This blog post was inspired by a conversation with a co-worker about using a slice as a stack. The conversation turned into a wider discussion on the way slices work in Go, so I thought it would be useful to write it up.

Every discussion of Go’s slice type starts by talking about something that isn’t a slice, namely, Go’s array type. Arrays in Go have two relevant properties:

As a result of the second property, two slices can share the same underlying array. Consider these examples:

Most programmers have an intuitive understanding of how a Go slice’s underlying array works because it matches how array-like concepts in other languages tend to work. For example, here’s the first example of this section rewritten in Python:

And also in Ruby:

The same applies to most languages that treat arrays as objects or reference types.4

The magic that makes a slice behave both as a value and a pointer is to understand that a slice is actually a struct type. This is commonly referred to as a slice header after its counterpart in the reflect package. The definition of a slice header looks something like this: 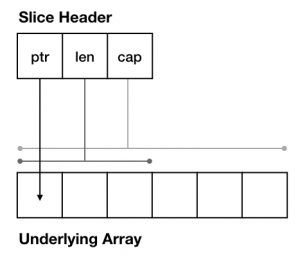 This is important because unlike map and chan types slices are value types and are copied when assigned or passed as arguments to functions.

To illustrate this, programmers instinctively understand that square‘s formal parameter v is an independent copy of the v declared in main.

So the operation of square on its v has no effect on main‘s v. So too the formal parameter s of double is an independent copy of the slice s declared in main, not a pointer to main‘s s value.

The slightly unusual nature of a Go slice variable is it’s passed around as a value, not than a pointer. 90% of the time when you declare a struct in Go, you will pass around a pointer to values of that struct.5 This is quite uncommon, the only other example of passing a struct around as a value I can think of off hand is time.Time.

It is this exceptional behaviour of slices as values, rather than pointers to values, that can confuses Go programmer’s understanding of how slices work. Just remember that any time you assign, subslice, or pass or return, a slice, you’re making a copy of the three fields in the slice header; the pointer to the underlying array, and the current length and capacity.

Putting it all together

I’m going to conclude this post on the example of a slice as a stack that I opened this post with:

Starting from main we pass a nil slice into f as level 0. Inside f we append to s the current level before incrementing level and recursing. Once level exceeds 5, the calls to f return, printing their current level and the contents of their copy of s.

If you want to find out more about how slices work in Go, I recommend these posts from the Go blog: