Most programmers should easily spot the data race in this program.

The loop functions are changing the value of maker without using a lock, so it is undefined which implementation of Hello will be called when maker.Hello() is executed by the for loop in the main function.

Some programmers appear to be happy with this data race; either Ben or Jerry will greet the customer, it doesn’t matter which.

Lets run this code, and see what happens.

What! Hold up. Ben sometimes thinks that he is Jerry. How is this possible?

An interface is conceptually a struct with two fields.

If we were to describe an interface in Go, it would look something like this.

Type points to a structure that describes the type of the value that implements this interface. Data points to the value of the implementation itself. The contents of Data are passed as the receiver of any method called via the interface.

For the statement var maker IceCreamMaker = ben, the compiler will generate code that does the following. 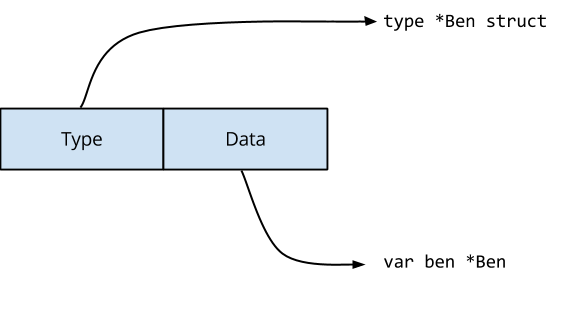 The interface’s Type field is set to point to the definition of the *Ben type, and the Data field contains a copy of ben, that is, a pointer to a Ben value.

When loop1() executes the statement, maker = jerry, both fields of the interface value must be updated. 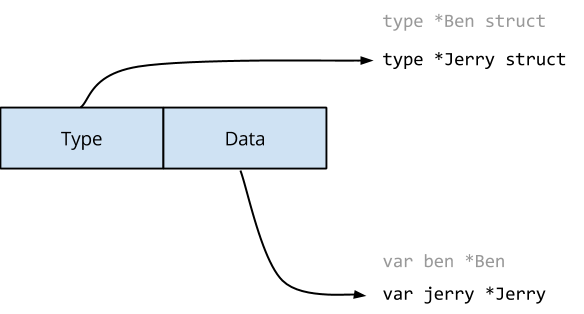 Type now points to the definition of a *Jerry and Data contains a pointer to an instance of Jerry.

The Go memory model says that writes to a single machine word will be atomic, but interfaces are two word values. It is possible that another goroutine may observe the contents of the interface value while it is being changed. In this case it may see something like this

And so Jerry‘s Hello() function is called with ben as the receiver.

There is no such thing as a safe data race. Your program either has no data races, or its operation is undefined.

In this example, the layout of the Ben and Jerry structs were identical in memory, so they were in some sense compatible. Imagine the chaos that would occur if they had different memory representations (this is left as an exercise to the reader).

The Go race detector will spot this error, and many others, and is as simple to use as adding the -race flag to your go test, build, or install command.

In the example code, the Hello method is declared on Ben or Jerry‘s pointer receiver. If this were instead declared as a method on the Ben or Jerry value, would this solve the data race ?